What is the ISRD?

The International Self-Report Delinquency Study (ISRD) is an international project that collects and compares data from self-report surveys on delinquency among middle school students in countries throughout the world. Self-report surveys are said to be useful for revealing the characteristics and backgrounds of both perpetrators and victims of crime and for testing criminological theories. The cross-national analysis also reveals similarities and differences between Japan and other countries. The ISRD project provides information which is useful in devising measures to control and prevent juvenile delinquency.

The Sociological Criminology Unit and the Quantitative and Qualitative Methodologies Unit of the Criminology Research Center are currently working alongside one another to represent Japan as part of the ISRD project.

Background, Purpose, and Guidelines of the ISRD

The large majority of juvenile delinquency takes the form of crimes that often go unnoticed by victims of crimes with no specific victims, such as shoplifting and drug use. Additionally, juvenile victims of crime and violence often suffer at the hands of their family members, friends or other people who are close to them and these juvenile victims tend not to report their incidents to the police. For these reasons, police and other official statistics do not accurately reflect the actual state of juvenile delinquency. Self-report delinquency surveys were developed and introduced to solve this problem and improve our understanding of the causes of delinquency.

Although self-report delinquency surveys have been employed in numerous countries, mainly in North America and European countries, over time it has been difficult to compare the results across countries due to variations in sampling methods and questions. In light of this, the ISRD project was established to conduct self-report delinquency surveys in a standardized format suitable for simultaneous implementation by multiple countries.

The ISRD has the following two objectives:

As a general rule, surveys conducted in participating countries must follow an ISRD protocol. The main procedures and method of the survey are given below using ISRD3 as an illustrative example.

The target population was defined as first, second, and third-year middle school students residing in a highly populated metropolitan area (two or more cities selected in each country; 300 students selected from each school year for a total of 900 students per city). Samples were obtained by randomly choosing classes of middle schools located in the selected cities. Researchers then visited the schools in person and conducted the survey on a class-by-class basis. Specifically, each student was handed a tablet PC and asked to complete a questionnaire installed on the tablet.

The survey includes questions on perpetration of crime and delinquency; victimization; relationships with family, school, and peers; feelings of guilt and shame; trust in police; and basic attributes.

For ISRD4, the age of the target population will be raised to third year middle school students and first, second, and third year high school students. As a new initiative, there are also plans to implement the survey over the Internet (as a national web survey) separate from the sample survey conducted in school classes.

History of the ISRD-JAPAN Project and Future Prospects

The ISRD-JAPAN project started in September 2017 after Professor Ineke Marshall (Northeastern University), the chair of the ISRD Steering Committee, asked Dr. Mitsuaki UEDA (contract research staff at the Criminology Research Center) to participate in the ISRD.

Project members were then assembled and several research meetings were held. The research meetings set to work producing a translation of the ISRD3 survey form (English version), and by the end of 2018, a Japanese version was complete. A preliminary survey was then conducted to verify the efficacy of the survey form with the cooperation of public middle schools in Aichi Prefecture and Osaka Prefecture (in December 2018 and March 2019, respectively).

Regarding the upcoming ISRD4 survey, a number of thematic topic questions will be added to the survey form that need translation, but apart from the funds needed to conduct the survey and schools to cooperate in the survey, everything required to commence with ISRD4 is already in place (we are currently working on securing the external funds necessary to implement this project without interruption).

- Trust in the Police Force, Police Legitimacy, and the Intent to Offend: A Study of Japanese Teenagers

- Development of a delinquency scale based on ISRD3 in Japan

Every year, the ISRD holds a workshop at the annual conference of the European Society of Criminology (ESC). Masahiro TSUSHIMA (Director, Research Section; Director, Sociological Criminology Unit, and Quantitative and Qualitative Methodologies Unit, Criminology Research Center), Chie MORIHISA, Sho SAGARA, and Risa TSUSHIMA (all contract research staff at Criminology Research Center) participated in the ISRD Workshop held on September 17, 2019 (Ghent University, Belgium) as representatives of Japan. As participants, they shared findings and troubles arising from the administration of ISRD3, collected information on guidelines of conduct for ISRD4 that is set to commence in January 2021, and developed relationships with the members of the ISRD Steering Committee and other representatives of participating countries. 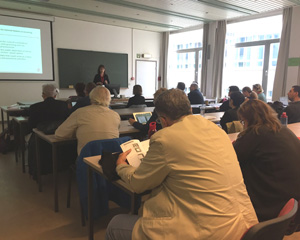 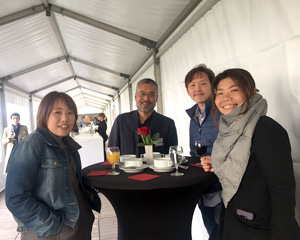 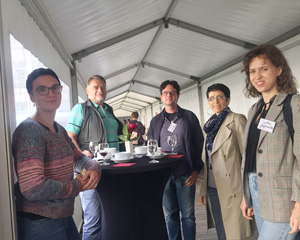